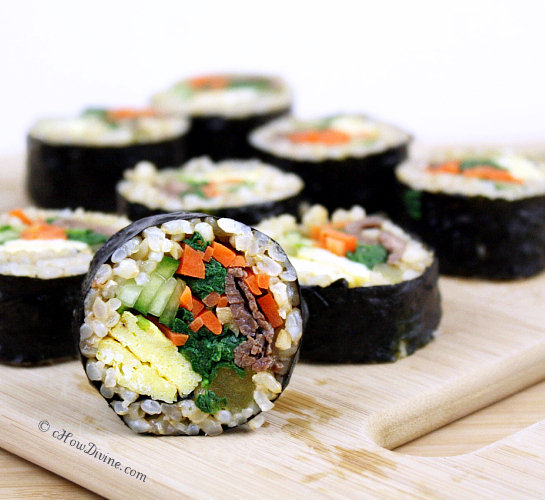 I try to make a lot of banchan (Korean side dishes) on the weekends. During the week, I can just eat them cold right out the fridge with some steamed rice that’s always waiting for me in my trusty rice cooker. If I’m feeling a little more ambitious, I would fry up an egg and make bibimbap. And if I’m feeling even more ambitious, I would make gimbap. It doesn’t happen too often, but often enough for me to sate my occasional gimbap cravings. On a side note, you may also know gimbap as Korean “sushi” because of its similarities with the Japanese Futomaki.

I know some people are intimidated by the “roll.” But truthfully, it’s not that difficult. Just to prove the point, I asked my husband to roll one. The image below is my husband rolling his gimbap. Believe me, if he can do it, it’s pretty much foolproof. As bright as he is, he is pretty much useless in the kitchen. Luckily he does the dishes and cleans up. So I guess I’ll keep him around. 🙂 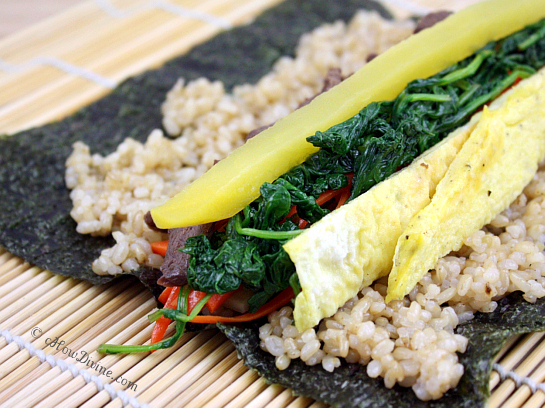 When making gimbap, make sure the rice you are using is short grain. Short-grain rice is stickier which is necessary for the sushi to keep its shape. Some markets carry “sushi rice,” which is just short-grain, white rice. “Sushi rice” is a safe option. And you can use as much or as little vegetable fillings as you want. It’s up to you. However, use less filling if you are a novice. It will be much easier to roll.

If you want to make Vegetarian or Vegan (adaptable) Gimbap, you can find it here.

Other options for fillings include (but not limited to) kimchi, fish cakes, cheese, imitation crab, and perilla leaves.