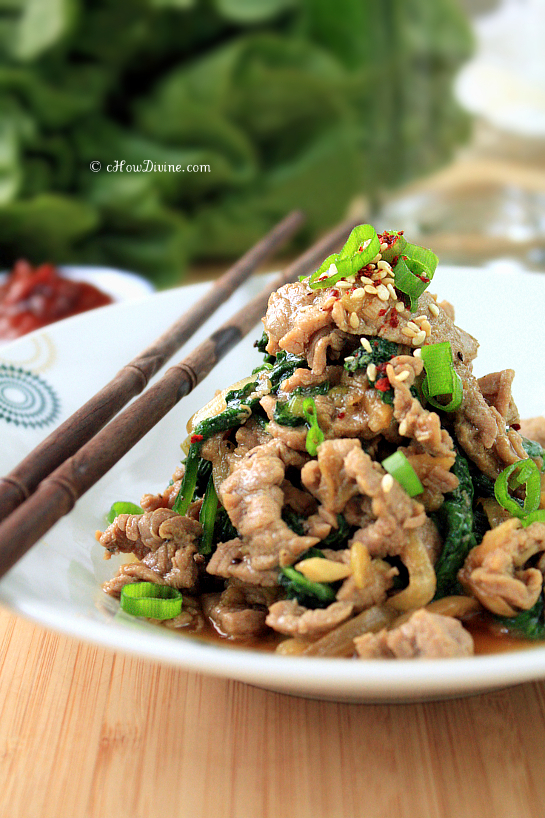 I decided to cook some red meat this week. I’m one of those people who need some animal protein – red meat in particular – to feel “all-there.” My body just doesn’t seem to absorb iron from plants efficiently. Whatever the reason, I get horribly iron-deficient. Dark under-eye circles. Fatigue. Headaches. Muscle aches. A whole gamut of symptoms I won’t bore you with. I just eat a little of red meat once a week for a few weeks. And voilà. Symptoms gone.

To ease the symptoms, I made some bulgogi with wilted spinach this week. I felt bad, because my husband is on a strict eating program for the next two months for his psoriasis. I knew he wouldn’t be able to resist taking a nibble or two… or ten. So I tried to make it as lean and healthy as possible. For starters, I decided to add some spinach. And I bought grass-fed beef since it is much higher in beneficial omega-3 fats than its grain-fed counterpart. Additionally, I bought the leanest cut the butcher had available – the eye round. The butcher warned me when I got it that “it will turn tough as leather if [I didn’t] eat it pretty rare or braised.” I know. 🙂 I’ve made bulgogi with this cut plenty of times. No worries.

You just have to make sure that the meat is cut as thin as possible against the grain. Partially freezing the meat goes a long way in achieving a paper-thin cut. Additionally, I add a small amount of kiwi to the marinade. Kiwi is rich in a protein-dissolving enzyme called actinidin, which helps tenderize the meat. 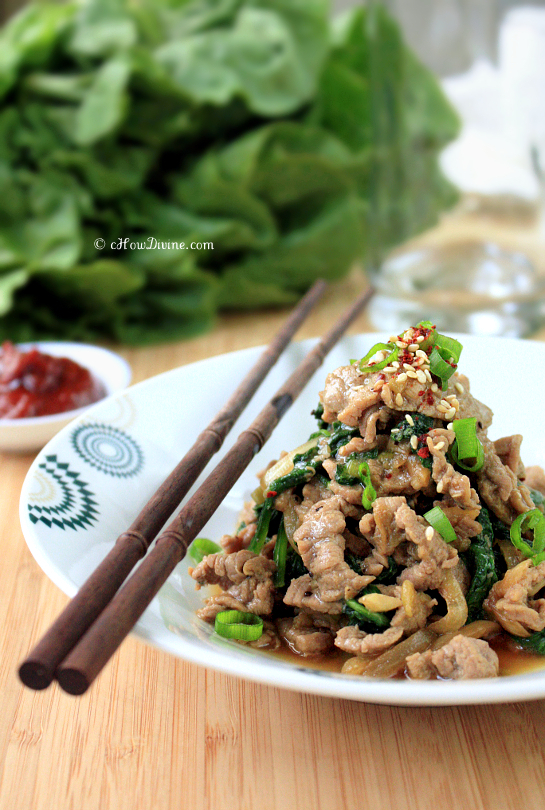 I make bulgogi often, because it’s one of my favorite beef dishes. And there is a lot of flexibility with bulgogi. You can use just about any cut of meat you want: rib eye, tenderloin, new york strip, sirloin, eye round, etc. I’m partial to tenderloin, but if I want a very lean cut of meat, I go for eye round. As long as it’s prepared correctly, eye round makes a perfectly tender bulgogi. You can see that in the photos. And that’s no photo trickery! 😀

You don’t want to completely freeze the meat. If you do, you will end up with a powdery mess when attempting to get a super-thin slice.

Do NOT marinate this more than the recommended time. You probably can get away with refrigerating it for a day, but it will turn into a GRAINY MUSH if you leave it longer. I did a little experiment and left it for about 3 days in the fridge. Wow. It turned into a grainy mess. You may not see it when it’s raw. But when you try to cook it, it will just break down into mush. Kiwi is very effective in dissolving proteins!

If you are using a tender cut of meat, like rib eye or tenderloin, do NOT use kiwi.

For this dish, you are NOT trying to brown the meat. Cook it until it’s JUST cooked through. You will end up drying out the beef due to the lean cut and the thinness of the beef. There will be some broth that will form in your pan. That is fine. That broth is delicious when poured over rice.