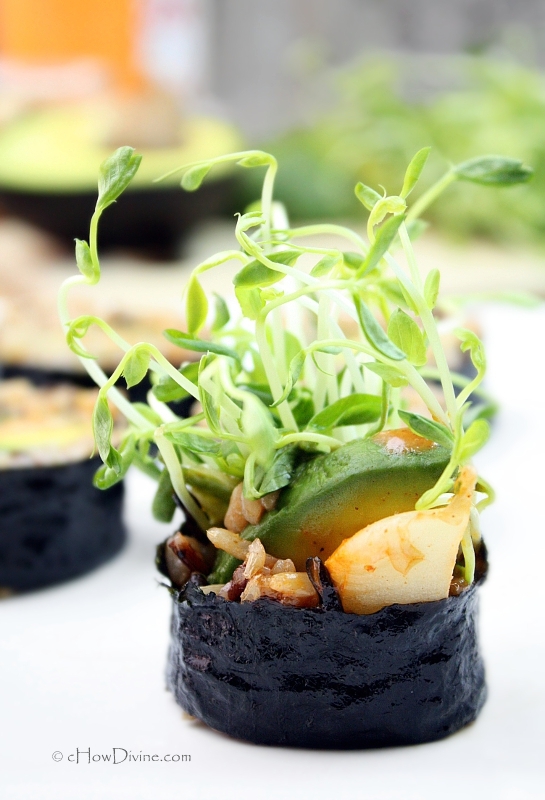 I made some simple but super delectable Kimchi Avocado Rolls last week, all thanks to a subpar experience at a restaurant. And it’s become my (new) favorite way to enjoy kimchi. Let me explain. A few weeks ago, I tried a kimchi roll (Gimchi Gimbap) at a restaurant at the urging of the server. He called it “fantastic” and “probably the most popular item” on the menu. You don’t have to twist my arm to try a kimchi dish, but I was a little trepidatious about trying it at a non-Korean restaurant. But we tried it anyway. I’ll say that the dish had a lot of potential. It, however, left me confused.

The cabbage kimchi they used in the roll was beyond ripe, but they compounded the problem by adding vinegar to it. What?! Perfectly ripe kimchi will give you a light zing on your tongue, but it will not taste sour. And unless it’s “quick kimchi” you’d want to eat right away, vinegar is not added to cabbage kimchi. The fermentation process produces its own vinegar of sorts.

So as soon as we got home, I decided to make my own version of it. Kimchi rolls or Gimchi Gimbap are not uncommon in Korean households. After all, we (Koreans I mean) find ways to put kimchi in just about everything. We had some snow pea sprouts, cucumbers, and avocados in the fridge. They each go so well with kimchi. It worked out perfectly!

I used a combination of wild rice, forbidden rice, brown rice, and brown sweet rice. But if you are a newbie to this, you should use sushi rice or short grain white rice. They are stickier in texture and much easier to roll. Additionally, if you don’t have snow pea sprouts (or just don’t like them), you can use other types or sprouts or omit them all together.

I also made some cashew-gochujang sauce for dipping. You don’t really need it, because the kimchi itself is so flavorful. But it was a nice added touch. It also made this simple dish seem a whole lot fancier. 🙂

I prefer the sauce with raw cashew or almond butter. But if you don’t have any on hand, you can use other nut butters.

For gluten-free option, use gf sriracha instead of gochujang. Keep in mind that sriracha is spicier than most gochujang sold in stores. Start with about 1/2 tsp of sriracha and taste test. Additionally, if you decide to use sriracha, remember to decrease the amount of vinegar as sriracha contains vinegar.

To keep this vegan, make sure your kimchi is vegan. Most kimchi sold in Korean markets is not vegan. But vegan kimchi is readily available at Whole Foods or other health food stores.

I gave approximate amounts for the filling, because the amount will differ depending on your preference and skill level. I use A LOT (more than the 1/2 cup) of kimchi in this, but rolling the gimbap will be more difficult with increased filling. So if you are a newbie, start with a low filling to rice ratio. Once you are comfortable, you can increase the filling.

You can adjust the amount to gochujang and agave depending on how your spice and sweet tolerance/preference. 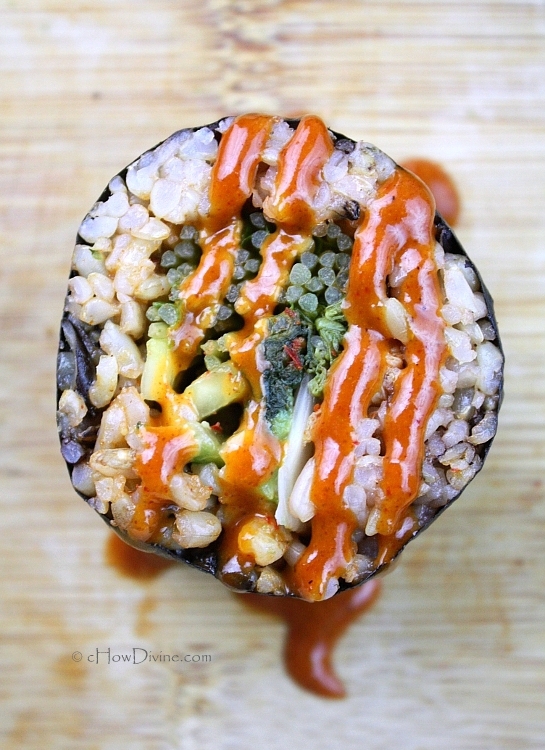